I had in mind to do some cartoon head so I can make it quick, and boy was I wrong.
It took me about 12 hours to finish it..if you can even call it finished. I started researching about smoothing the clay, cause I got to a point where it was sort of done but it was really ruff..and I really wanted a smooth feel to it..my fingers can only do so much smoothing on the face at that size. And all the tools I had were for picking ,scraping and poking..so after doing some more research I noticed a tool called a Stylus which is a long metal handle and round nib on the end. I thought to myself ; ok I don't have one of those..so I looked around..and found a match in the kitchen..and the head of the match actually worked well for me to get into some of the areas in the face to smooth out..but of course I still end up needing something even smaller...so I look around my studio..and of course I find a hair pin..so I straighten it out..cut off one end..and attach it to a old paint brush handle..with all that said., I managed to smooth out some small detail in the face..like around the nose, eyes and lips.
It's not perfect!; but for a second attempt at Clay, its not too bad. 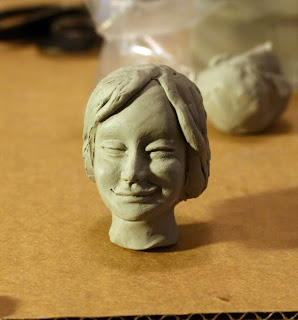 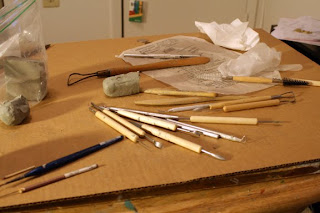 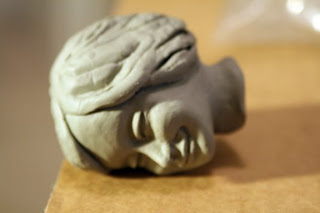 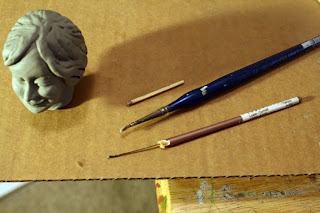 Popular posts from this blog

So a few days ago..what I thought was a client...reached out to me when he found me on #thumbtack
a website that caters to artist.

The guy gave me a sob story about being in a hospital as a cancer victim, and that he was moving out of the U.S. and wanted to get his wife a birthday gift for their anniversary. yada yada yada....
he sends me a check


I got the check with in a few days of sealing the deal...Fedex- ed to my house!
I  was rushing to get to the bank before it closed (Saturday) but something seemed off once I opened the package.

1st. red flag....was the name of the check...the check was under a different name!.
I thought maybe it was the guys assistant which he did mention was going to handle his affairs , (since he was in the hospital..)

2nd. red flag was the check paper it self..
The paper itself felt a little light,, and the signature was digitally printed in a different opacity than the rest of the print type.

Being a freelance artist for almost 2 decades, you see a good a…
Read more
February 17, 2018
European Tour

I took my first vacation to Europe this year  landing first in Rome,Italy then continuing my adventure to Berlin, Germany.
I took in the culture by checking out all the possible museums and galleries, ancient ruins and beautiful wineries. I enjoyed the night life  in both countries with the wonderful people of Europe, it was my first trip over seas but it surely wont be my last.

February 17, 2020
So right away ass I opened it, I knew this was a scam. No introduction or how they found my work, nothing.got this in the mail the other day.


Edwin Brown (acha1b2c3@gmail.com)To:youDetails Hi,
I am interested in one of your Art works within the price range of $500 to $5000 Also do you accept payment via cashier's or bank check?


I responded with I only accept money orders!


Edwin Brown (acha1b2c3@gmail.com)To:youDetails I can only make the payment via cashier's check and the piece won't be shipped until the check cleared to your account. Thank You.

Be vigilant Artists out there, scammers will try to sucker you in with fake checks and processed orders in order to steal any money you have in your accouts.